Last fall, I took a trip to Washington DC and had the opportunity to attend several documentaries at the annual Double Exposure investigative film festival. It takes place every October and I would highly recommend it. One of the films I saw there was Divide and Conquer: The Story of Roger Ailes, which chronicled the rise and fall of one of the most powerful political operatives of all time.

As chairman and CEO, Roger Ailes was the man primarily responsible for the abrasive tone and candor of right-wing cable behemoth Fox News. A former campaign official for Richard Nixon, Ronald Reagan, and Mitch McConnell, among others, Ailes’ career-long harassment of women finally caught up with him later in life. He was sued by star Fox News anchors Gretchen Carlson and Megyn Kelly, toppling a house of cards it took nearly 50 years for him to build.

Enter screenwriter Charles Randolph and director Jay Roach. Their new film Bombshell looks at these events from the perspective of the women abused by Ailes. The film has been criticized for attempting to be a female-perspective film told from a male perspective, and I think that’s a valid discussion to be had. However, I can’t think of any other mainstream narrative film which so frankly captures the tension and dynamics of fear and mistrust that instances of workplace sexual harassment create. In my opinion, that portrayal is vitally important.

Nicole Kidman as Gretchen Carlson, Charlize Theron as Megyn Kelly, and Margot Robbie as Kayla Pospisil (a composite character) make a perfect acting trifecta. In a film that uses similar editing techniques to Adam McKay’s The Big Short, Bombshell is more broadly successful at weaving its three mini-narratives together into one without giving its audience whiplash. It’s a fascinating domino effect which doesn’t behave like one cinematically. Carlson was basically the whistleblower, which prompted Kelly to file her lawsuit, and the film uses young Kayla to illustrate how these problems at Fox would have been multi-generational had someone not said something.

From my perspective, this is one of Nicole Kidman’s best performances. She probably gets the least screen time of the three, but she captures the constant feeling of being between a rock and a hard place, not only at work, but in the ways her work experience impacts her personal life.

Golden Globe nominee Charlize Theron disappears into the role. There were times I did double-takes because in addition to the excellent makeup (sidebar: whoever did the makeup on the Bill O’Reilly character did an incredible job), Theron captures Kelly’s swagger and confidence while maintaining a constant sense of the ever-present whirlwind. 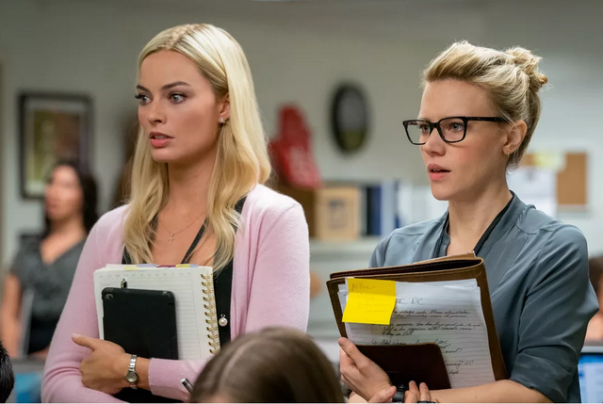 Fellow Golden Globe nominee Margot Robbie’s performance is the most openly emotional of the three, and rightly so. We actually fully see her predicament rather than flashing back to instances of harassment, basically because of where the film begins, and I loved that they gave her a surprising choice of an actress to play off of — Kate McKinnon in her first dramatic role I’m aware of — and the two are excellent together. They dissect Fox as equals, as friends, from the outside. I think those scenes get at some of the left critique others feel the film is lacking.

Many don’t think the film leans in enough on a critique of Fox News, but I would posit that the film is ultimately not about Fox News or the Republican party. By putting such an emphasis on each of its three main characters’ personal lives and how they intertwine with Ailes’ power, I think you get the detail the film is after — again, Bombshell is a primer on workplace sexual harassment, and it’s sad to say, but many people in the U.S. still need that. It’s less important to me that this film criticize Trump, Ailes, or even the on-air Fox talent it follows for whatever political beliefs they harbor. I would submit the idea that Bombshell’s explicit focus on treatment of women in the workplace is more helpful to the larger conversation right now, because there is nobody in America who hasn’t already made their mind up about Trump and/or Trumpists.

‘Bombshell’ is now playing everywhere in the U.S.

1hr, 48min; Rated R for sexual material and language throughout.