From the first twenty minutes of Booksmart, I could tell it would be one of my favorite films of the year. That’s because the laughs come so frequently, so feistily, so unapologetically and breathtakingly uniquely that it’s hard to imagine a funnier or more important comedy being released this year.

I tend to dislike the phrase “it’s the movie we need right now,” but Booksmart really is that movie.

Lady Bird’s Beanie Feldstein gives what I would call an Oscar-worthy performance as Molly, a high-achieving Class President of a Los Angeles high school. She and her best friend Amy, played by the wonderful Kaitlyn Dever, have a reputation for being school-focused at the total expense of a social life. But they plan to prove everyone wrong by making it to the hottest party of the year the night before graduation. 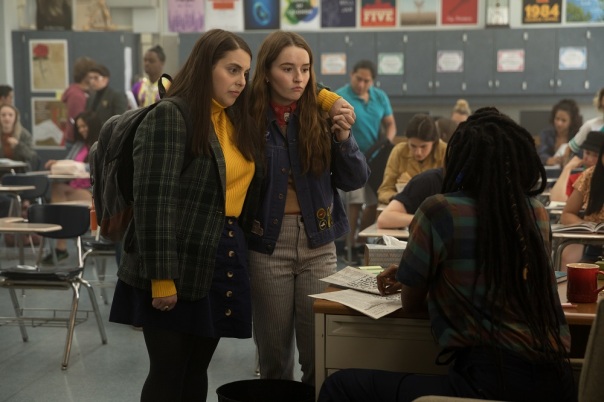 Both characters are total anomalies in the historical landscape of high school comedies, and especially in those led by women. Amy has been out as a lesbian for two years, but has still never acted on her feelings with anyone. Molly has a serious and ambitious personality that may not make her the most popular student, but the film’s jokes are never made at her expense. Their unique status in the genre is such an aspirational delight. I wish I had had a movie like Booksmart as a touchstone growing up.

Their night leads them down many a strange path, as they hobnob with students – and some faculty – of higher social standing. Eventually, they make it to the party, and the movie then gets a little more serious, both technically and dramatically, and it really packs a surprising punch.

Not only is Booksmart the funniest high school comedy since Mean Girls and an important statement for young people in the Trump era, but it’s also deeply resonant for anyone who’s ever had a best friend. It reminded me of my relationship with my best friend, who I’ve known since eighth grade (we’re 25 now, for reference). The film is about the way best friends grow with each other by challenging one another’s perceptions of themselves, and it’s just so direct and honest with all of that. It’s truly a breath of fresh air.

In her directing debut, Olivia Wilde has crafted an instant classic. Booksmart is a great bookmark for 2019, but I think it will also stand the test of time as one of the greatest high school comedies ever made.

Booksmart will debut nationwide in the U.S. on Friday, May 24