Welcome to “On Second Viewing” or “OSV,” a feature where I will dissect films which I feel differently about — positively or negatively — on second viewing than I did the first time around, be they recent releases or treasured classics.

Captain Marvel has been at the center of some cultural consternation before and since its release this past Thursday. I first saw it Thursday night, and saw it again with family Saturday. I felt positive but tepidly so the first time around. But as I listened to others’ criticisms of the film, I found myself defending it more and more. I still didn’t quite know why. The second time around, I realized there were a few key reasons why I now consider it my favorite Marvel movie after Captain America: Civil War.

It’s not fussy about its deeper comic lore

I think it’s incredible that we are at this point in such a serialized franchise. It now makes sense to me that Captain Marvel comes so late in the game. Carol Danvers (Brie Larson) is technically the first avenger (meaning the first person to be recruited by Nick Fury), but had we begun back in 2008 with the Kree homeworld she comes from and their war with the shapeshifting alien Skrulls, the attempted Marvel Cinematic Universe would have been laughed out of the multiplexes. It’s a huge credit to Marvel Studios President and producer extraordinaire Kevin Feige that he realized a certain level of trust had to be built to get to the more out-there characters. Even if there was never a Bible for the MCU, it comes off as a flawlessly executed business plan.

So after 10 years of MCU films, many of which are origin stories, we have an origin story in Captain Marvel which has to condense a lot of new information and convince us of its lead’s nearly unlimited power.

Part of the reason I didn’t see the film as successful in both areas the first time around has to do with its visual language as compared with other films in the MCU. For example, when I saw Avengers: Infinity War, one of the things I was knocked out by was its wide shots, in which we see so much chaos going on that the scenes started to look exactly like panels of a comic book to me. The less hi-res detail I saw, the more I was reminded of an ink-and-color graphic novel, where the visual language is unencumbered by computer-generated graphics and the only limits are the artists’ imaginations.

Captain Marvel directors Anna Boden and Ryan Fleck made their bones in the industry with indie darlings like Half Nelson and Sugar. A lot of their films, as most obviously evidenced in Sugar, are about disillusioned people trying to find their place in the world. They tend to be close-up, detailed portraits of these characters. In my opinion, that’s why Captain Marvel is perceived to have a lack of depth. The way Boden and Fleck structured Carol’s origin — in which she has to figure it out herself — not only fits their sensibilities, but is a much less obvious way to reveal her specific origins as a superhero. Because it’s more character-focused, the film lacks a certain blockbuster excitement factor that it may have been widely hoped it would have. No chaotic wide shots, no real aping of comic panels; it’s just a nice, gentle quasi-buddy cop movie with Danvers and Fury.

But that’s why I admire it in the context of the MCU. We are at a point with this franchise where a movie like this totally makes sense. Where you can have the Kree and the Skrulls and intergalactic conflict and mix it with a character-driven story and the audience doesn’t bat an eye. The tone work has been put in for so long that we trust these storytellers, and it’s acceptable to us that a whole new part of this world is introduced quickly and briskly.

I get why people don’t like the amnesia storyline, but I’m cool with it

In context of Boden and Fleck’s career and their style, this story totally makes tonal sense. It also works because had we seen Carol take the Air Force mission, be kidnapped by Yon-Rogg (Jude Law), and then come to remember her life on earth in that order, we would have known all the secrets ahead of time and her attempts to discover her full power would be 100% boring and pointless, because we would have already known everything there was to know. There would be no story to tell.

Young Samuel L. Jackson is pretty much the greatest

I know it’s been praised to death at this point, but my goodness, the de-aging effect on Sam Jackson is amazing. His performance is great, and it was great to see a pre-Avengers Fury. His ‘Mr. Postman’ bit was my favorite part. 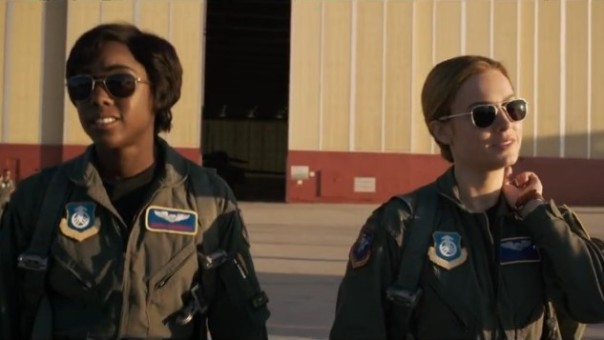 The movie never gloats or tries to act like it’s especially important because it features a lot of female leads, it just has them and they’re well-written and fun. I especially enjoyed the dynamic between Carol and Maria Rambeau (Lashana Lynch), her best friend from the Air Force. Because of Carol’s disappearance and new personality as ‘Vers,’ their initial scenes together in the film are not exactly buddy-buddy, and I liked how they grew closer again after that long absence. It’s an interesting conflict to give any characters, and I also appreciated that the conflict stemmed from their careers and the resolution of their conflict contributed to the larger plot and Carol’s character development.

Also, I love how the military misogyny is just glossed over. If the film were structured in a more standard way, I have a feeling that would have been a larger scene. But mainstream audiences have already seen all that stuff, and we obviously understand how bad toxic masculinity can be, so it’s just quickly mentioned and we get it and we move on. Nice touch. The film treats us as friends and equals in this instance rather than lecturing us. 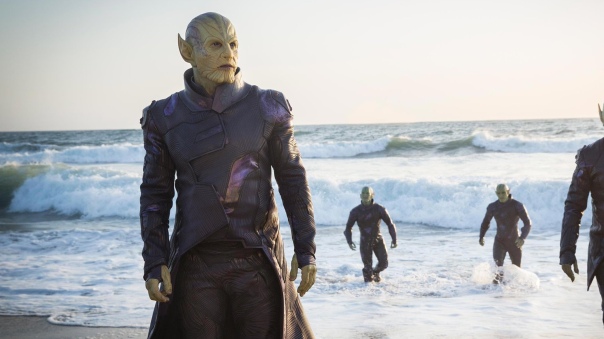 Attention to detail in Kree and Skrull fights

I loved everything about the fight on the metro train after ‘Vers’ first lands on Earth. I liked that neither her nor the Skrulls knew everything about Earth, but not only in a cultural sense with the 90s references, but with certain facts about life on Earth. There are several examples, but one I especially loved was when ‘Vers’ and a Skrull are fighting on top of the train, the Skrull is running from her and, not knowing any better, grabs the train’s electric arc connection to the overhead power line, giving him an extreme shock. It’s a tiny touch, but one I appreciated as a great little piece of world-building.

Captain Marvel is nowhere near a perfect film, but I’m a big fan of it. I totally understand the genuine criticisms of it, such as its exposition-stuffing and the fact that the amnesia-esque style of character development has been done. A lot. But I do rankle at the notion I’ve heard and read from some that this film has to somehow be the be-all, end-all of the MCU. That’s supposed to be Endgame. Or hopefully it will be. In the meantime, I’ll be seeing Captain Marvel again and singing ‘Mr. Postman’ on the way out.