“Tell me what their laughter means,” Amy Annelle sings over the ending of Three Billboards Outside Ebbing, Missouri. It’s a cover of “Buckskin Stallion Blues” by Townes Van Zandt. This is an important touch because we’ve heard the original song in the film before, but not that line yet.

One of the biggest criticisms of Martin McDonagh’s latest film is that it’s tonally jarring in an unsuccessful mix of comedy and tragedy. I disagree with that analysis completely, but I’d like to unpack it a bit in order to get at what I find to be the true brilliance of the movie.

That lyric in the non-diegetic music at the film’s conclusion is a directive to the audience. We are meant to process why these characters employ such copious amounts of humorous banter in the midst of personal hell. One could make the argument that it’s just screenwriter McDonagh’s voice; it’s served him well as a playwright and in his budding filmmaking career. But for so many reasons, I think the quick wit takes on a deeper meaning when we look at the situations the characters are put in. 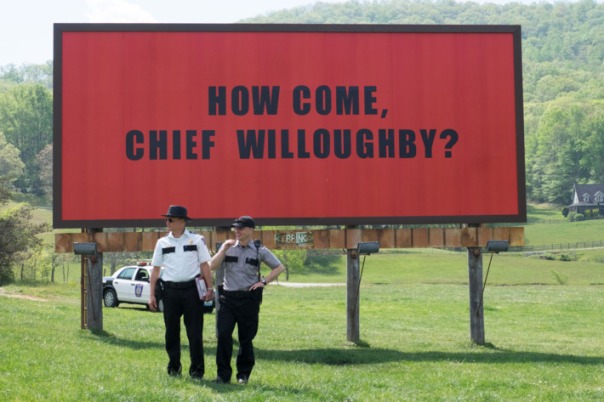 Mildred Hayes (Frances McDormand, who deserves an Oscar for this performance) decides to repurpose three abandoned billboards near her home in the fictional town of Ebbing in order to ask the police department a very important question. It’s been months since her daughter’s rape and murder, and no arrests have been made. It’s Mildred’s third sign that gets the town in a huff: ‘How Come, Chief Willoughby?’

Being a tiny town off the freeway, everyone knows practically everything about everyone else in Ebbing. Naturally, a policeman with cancer like Chief Willoughby (Woody Harrelson) gets more sympathy than Mildred, although most seem to be at least sympathetic to her grief.

Mildred first encounters the backlash when a local priest comes by her house to protest the billboards. She deflects him by basically pulling out the ‘let ye who are without sin cast the first stone’ card, but in an incredibly pithy way. She knows what she’s started is a war of words, and she also knows that in some ways, only words can save her.

Only when she is met with violence does she mete out violence of her own. The local dentist denies his harsh treatment of her after she injures him, arguably in self-defense. He mentions his support for Willoughby just as he’s about to drill, and the consequences are more severe than he’d imagined. 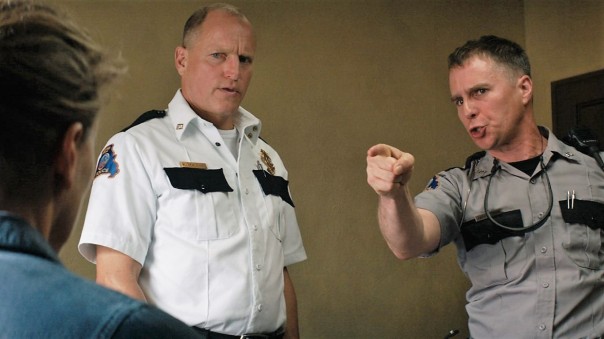 When interrogated by Willoughby and another officer, Jason Dixon (Sam Rockwell, also Oscar-worthy here), Mildred returns to her old standby: sarcasm. It doesn’t so much get her out of this bind as it does stall the forces working against her.

And that’s what the humor comes down to here: stalling pain. Our three main characters (Mildred, Willoughby, and Dixon) are going through such enormous personal crises that there is nothing they can do but at least try to laugh. Mildred and Willoughby’s respective pain is obvious. Dixon’s is a bit subtler. The character is nowhere near as good or as confident a comedian as the other two, but he needs the banter just as fiercely.

When we first meet Dixon, he’s discovering the billboards. They make easy enemies of he and Mildred, but because he’s not as competent a cop as Willoughby, he ends up going after Red Welby (Caleb Landry Jones), the advertising company manager who approved the signs. Neither Red nor Dixon are as exceptional with words as Mildred or Willoughby, so their conflict throughout the movie is mainly physical. Red and his signs represent to Dixon his failure as a policeman, including his failure to prevent his mentor Willoughby’s eventual suicide. But because he can’t express this in words, Dixon instead expresses it in brute force, injuring Red beyond recognition.

(As an aside, the sequence in which Dixon mauls Red is the best scene in movies in 2017. Not because it’s particularly pleasant to watch, but because it’s so well-made and vital to understanding Dixon as a character. The choice of music, the long take that ensures we’re following him as if he’s a force of nature that can’t be stopped, the absolute perfection of the visual gag at the end which also propels the story forward, it’s all just breathtaking. If you’ve seen it, you know what I’m talking about. And if you haven’t seen it, what are you doing reading this far in?! I’ve already spoiled so much! Stop reading this and see this movie!!!)

However, like every major person-to-person conflict in the film, Red and Dixon come to somewhat of a reconciliation. That’s what everything in the movie is building towards, and the ultimate is Dixon and Mildred.

There was a series of events I didn’t buy the first time I saw the film. It’s when Dixon saves Mildred’s daughter’s case file from the burning police station and James (Peter Dinklage), the self-described ‘town midget’ appears from around the corner to put out the flames. He also covers for Mildred, who started the fire, and afterwards suggests they go on a date. Mildred agrees, but only because she assumes it’s a blackmail tactic. The first time around, I thought this bit of plotting was far too convenient to fit in with the authenticity I felt from the rest of the movie, even though James does appear again, being nice enough to hold the ladder when Mildred has to repair her billboards. Eventually, their dinner scene later on convinced me why all this was necessary.

While at dinner with James, Mildred spots her ex-husband Charlie (John Hawkes) and his young wife Penelope (Samara Weaving) entering the restaurant. Charlie tells Mildred that Penelope has observed Mildred’s anger and that it only seems to ‘beget greater anger’ (which leads to one of the funniest exchanges in movies in 2017).

When Charlie leaves their table, the conversation between Mildred and James reveals James to be even kinder than she previously believed, thus forcing Mildred to examine her treatment of him and more importantly, finally reckon with her own anger.

What makes Dixon reckon with his anger is being in the same hospital room as Red. It’s arguably another thematic convenience, but it fits in so well with the theme of reconciliation that it doesn’t bother me.

Eventually, with Willoughby being gone and the town already having said everything they probably need to say about the billboards, it feels inevitable that Mildred and Dixon will come to some sort of understanding. And it’s truly beautiful when they do. It’s two people realizing that the conflict they’ve both idolized is in vain, and that the only way forward is forgiveness and acceptance. But it still comes with that pithy line: “tell me what their laughter means.” 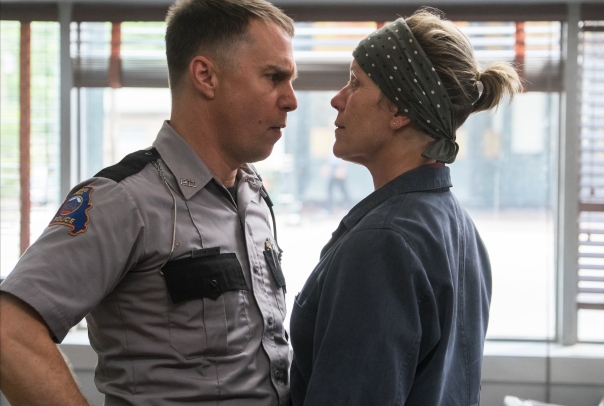 Their laughter used to mean they were avoiding pain. Now, their laughter means a glimpse forward to contentment. What was once a war of words escalated into real violence, then shrunk again to words, and ultimately became about ideas: justice, equality, purpose.

In a year defined by new political terms and insults being hurled from all sides of the political spectrum, what a blessing it is to have a film like Three Billboards Outside Ebbing, Missouri. It’s a film which represents the forgotten working class without turning them into southern caricature, a film which addresses their issues and concerns subtly and without judgment, and a film which also works without that subtext, with characters so memorable and well-conceived that the screenwriter’s winks and nods to Shakespeare and Oscar Wilde within the piece are actually quite apropos.

Tell me what their laughter means, indeed.