“There’ll never be another Camelot.”

Rarely does true acting royalty meet such an iconic political figure as Jacqueline Kennedy. It’s also rare to get a historical drama about a defining moment in American history that is directed in such a riskily artful way. But for me, the results of Pablo Larraín’s Jackie were totally worth the risk.

We open on a black screen, setting the tone with a moody and expressive musical score by Mica Levi (whose score for 2013’s Under the Skin is still a must-listen).

Then we finally get our first glimpse of Natalie Portman as Jackie. It’s a very tricky thing to get expressionism right in film, especially with a non-fictional subject, but director Larraín does it beautifully. The story isn’t told linearly at all. Instead, in editing which echoes the style of Terrence Malick, we get the overwhelming feeling of her grief rather than a minute-by-minute retelling of the events.

The former First Lady sits down with a reporter (Billy Crudup) just a week after her the assassination of her husband, 35th U.S. President John F. Kennedy. We jump from detail to detail of the grieving process as she tries as much as possible to self-edit the interview.

From the start, Portman’s powerhouse performance carries this movie. That’s not meant as an insult to the other wonderful aspects of the film, which I will continue to address.

But it would be impossible for the film to hold a candle to the power it ultimately has if Portman had not been involved.

Within the first half-hour, there are three scenes that could easily be used as Portman’s Oscar clip for her nomination. One of them was particularly striking to me, when Jackie nimbly turns one of the reporter’s lines back at him as she dries a significant amount of her own tears. 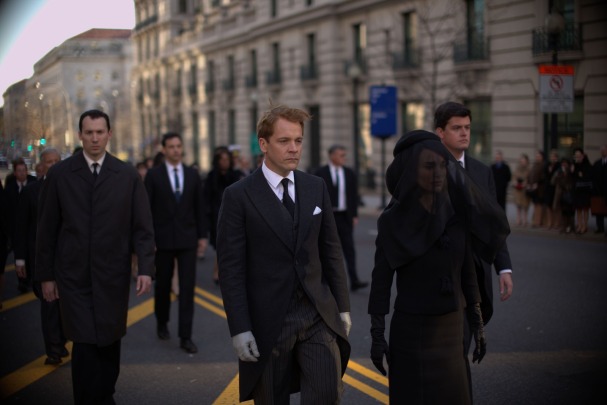 That moment was not only impressive because of her performance, but it’s where I started to notice the film’s impeccable writing. Noah Oppenheim has crafted a masterpiece of tone and candor. Humor and grace are injected at exactly the right times, even in a film which takes on more than its fair share of gloom.

Part of that injection of grace is helped by Peter Sarsgaard as JFK’s brother, Robert Kennedy. He’s been pointed out as one of the film’s weak points, but I couldn’t disagree more. One of the few moments that stuns without the considerable help of Portman is when JFK’s successor, President Lyndon Johnson (played here by John Carroll Lynch), witnesses the murder of assassination suspect Lee Harvey Oswald on live television.

Everyone in the room stands up as the gunshot rings out. Jackie is not in the room, so Robert jumps to the TV set, turns it off, and asserts to Johnson quite bravely that he will be the first one to tell Jackie. At this moment, you could have heard a pin drop in the theater I was in.

Given the alarming rhetoric on both sides of this recent election, it’s nice to see a movie which takes such a well-rounded, artistic, and compassionate approach to our nation’s political history.

And I know I don’t have a vote in the matter, but I’m rooting for Natalie Portman, Pablo Larraín, Noah Oppenheim, and Mica Levi to all be nominated for those coveted little gold men.

Jackie is rated R for brief strong violence and some language.