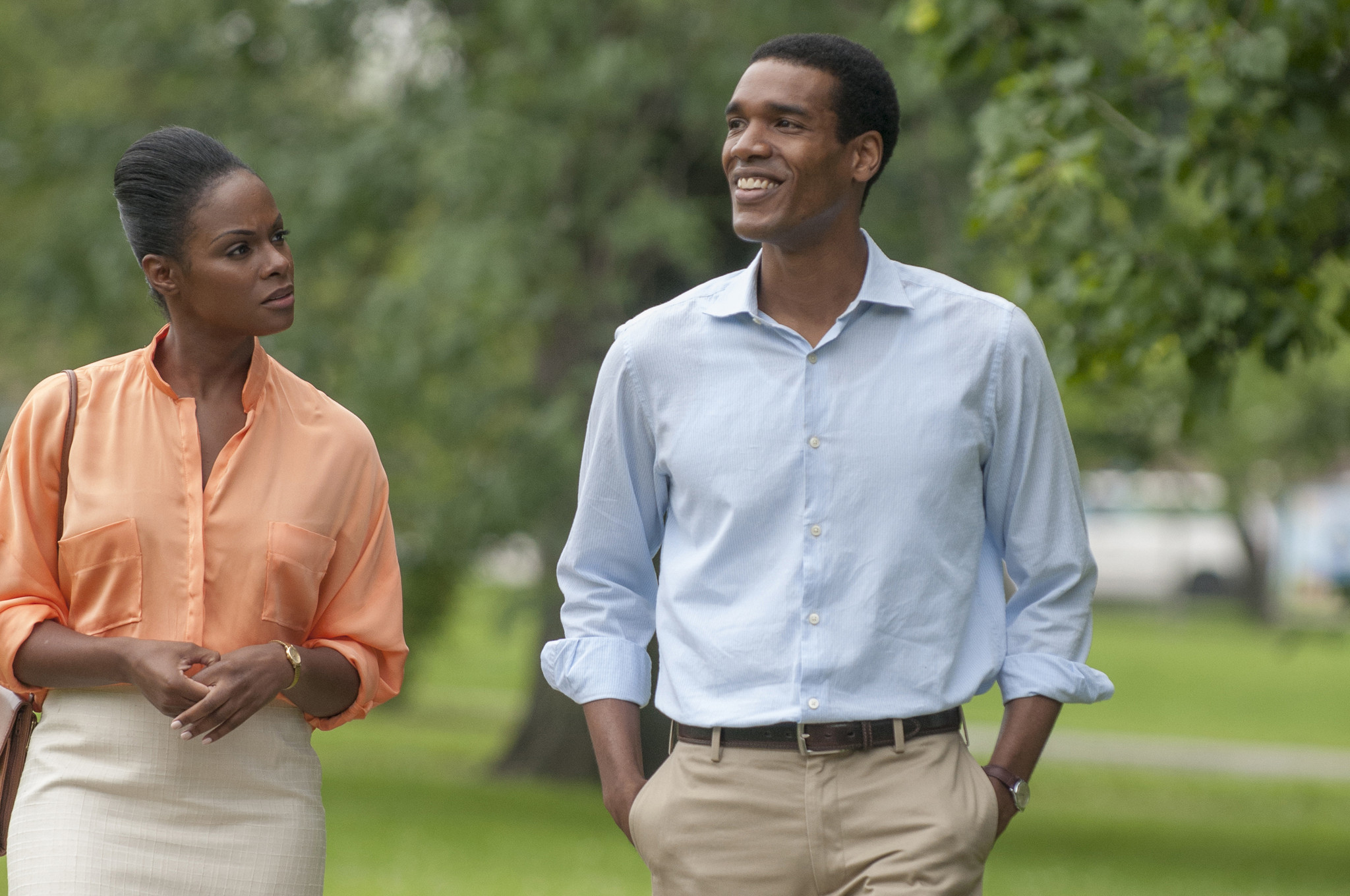 Summer 1989: boys ride tricycles through the streets of Chicago. Laundry hangs and dries in room after room on a sweltering day. Young lawyer Michelle Robinson (Tika Sumpter) prepares for what she says isn’t a date with Barack Obama (Parker Sawyers).

They’ve arranged to spend an afternoon together, but Michelle is under the impression that most of this time will be taken up by a community meeting on the south side of the city. Barack, an associate at her firm, convinces her to spend more time with him when she realizes the meeting isn’t until 4 p.m. His famous gift for speechmaking is put to good use here by writer-director Richard Tanne. It’s a cheeky moment with a certain finesse that continues to refine itself as their unanticipated bond grows stronger.

That finesse in their dialogue is on full display when Barack and Michelle attend an Afro-Centric art exhibit. They come from different sides of a similar set of tracks. Michelle’s career and upbringing have made her more book smart, while Barack’s multicultural roots have made him more street smart. They tease each other on this basis quite a bit, until it’s clear to them both they share a deeper connection.

Ironically for a film about two such iconic political figures, politics are rarely discussed. Conversations will naturally coast in and out of topics of personal ambition, personal heroes, and personal fears, but for the most part, that’s as close as it gets to any sort of historical commentary. But that’s the secret genius of Tanne’s film. By scoping ‘Southside with You’ specifically to the experiences of these two people, he’s made a film that’s instantly relatable to everyone who’s been on a successful first date.

Tika Sumpter and Parker Sawyers are electric. Neither of them resort to caricature or attempt to copy the speech patterns of the couple. Sawyers (who couldn’t look more like the man) simply plays Obama as a good-hearted idealist who returns verbal volleys from Sumpter as if they were pieces of cherry pie. Sumpter imbues Robinson with a knowing sense of worldliness which never completely overshadows her pride.

As the day comes to a close, the eye of cinematographer Pat Scola returns to the streets with a calming shot of street-lamps overhead as Barack’s worn-out Datsun rattles into an ice cream shop. What follows is a stunning little coda that retains the film’s sweetness yet finally adds the pitch-perfect level of romance for the moment. We all knew it was headed to romance anyway, but ‘Southside with You’ takes us deeper into that journey while reminding us we can feel that love, too.

‘Southside with You’ is rated PG-13 for brief strong language, smoking, a violent image and a drug reference.