Quite a few recent high-profile films have gone out of their way to hit us over the head with a timely message. For as much as I love ‘Zootopia,’ ‘Captain America: Civil War,’ and ‘Sausage Party,’ when it comes to their taking sides in political and cultural issues, I do admit they could be a little more subtle.

‘Indignation’ takes political subtlety to a whole new level. This is mostly out of necessity, since the Philip Roth novel the film is based on isn’t incredibly focused on activism. Instead it dutifully follows Roth avatar Marcus Messner (portrayed on screen by Logan Lerman) as he navigates his freshman year at Ohio’s Winesburg University (a nod to Sherwood Anderson) in 1955.

Marcus is a fairly sheltered kid; a no-nonsense, straight-A student and an only child. He works part-time at his father’s kosher butcher shop. His Jewish heritage is a point of pride for his parents (Linda Emond and Danny Burstein), but not so much for Marcus. He’s a severe introvert; tightly wound and feeling more and more confined in the freedom adolescence brings. He also demands his personal space and that his parents not worry about him. So it follows that when he leaves Newark to attend Winesburg, he eventually finds himself in trouble.

Marcus immediately takes a disliking to most of the social life of the school. His one savior is the gorgeous Olivia Hutton (Sarah Gadon), who gets very intimate very quickly in a way the inexperienced Marcus is not prepared for. This leads him to cut her off, but the more she continues to pop up in his life, the more interesting their connection becomes.

A dispute with his roommates leads him to find another room where he can be alone and not hassled by the school’s small Jewish contingent. As an audience, we wonder why Marcus is so high-strung about everything. Then in a long, remarkable confrontation about this with the school’s Dean (Tracy Letts), we start to understand.

The irony of the story is that in the most intellectually charged moment, that is when we see the quiet, sullen Marcus go from introvert to total extrovert. When his secret atheism is challenged by the Dean, that’s when Marcus seems most comfortable going on the defensive. And although he aggravates a bad medical condition in the process of arguing with the Dean, his bravery in this moment could serve as a lesson for a lot of us shy introverts in this awful political climate.

See, Marcus is a textbook overthinker. He’s also starting to mold himself into an empath by being around Olivia and hearing about some of her hardships in life. Logan Lerman delivers a magnificent performance that allows into all of this, but not in a showy way. First-time Director James Schamus, a longtime screenwriter and producer, allows not one scene without Marcus in it, thereby forcing the audience to confront his mental process. 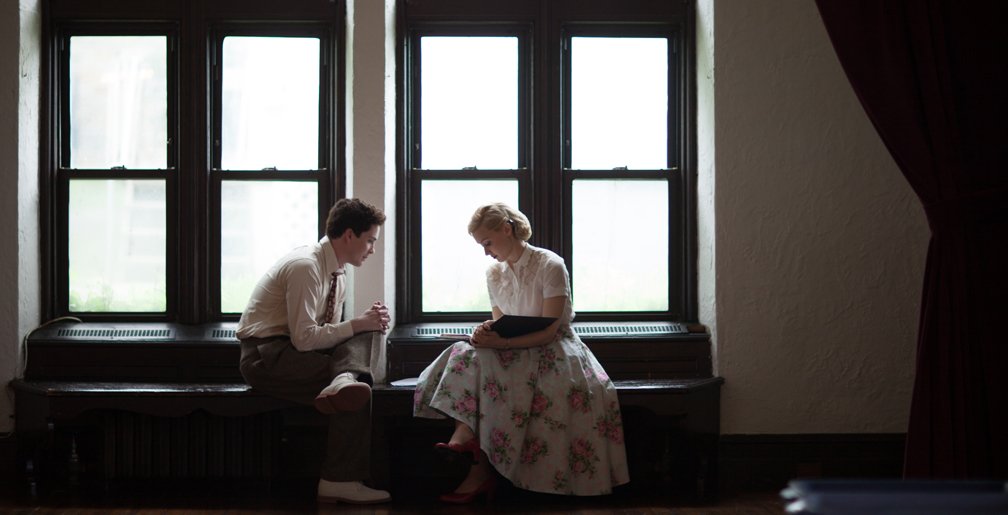 By only providing us with only Marcus’ side of this story, we can’t write off his personal problems as unimportant, even while the Korean War and the aftermath of World War II loom heavily in the subtext of almost every conversation. And because Lerman is so good at being charming while still not all smiles, he’s magnetic, and it’s fascinating to watch him finally come into his own as an actor.

Sarah Gadon is mysteriously beautiful as Olivia. Even while not on screen, her presence is deeply felt from the electric chemistry she and Lerman have when they’re together.

Lastly, Linda Emond gives what can only be described as a powerhouse performance as Marcus’ mother. She provides us with a deeper sense of the lovable, smart, and kind – if somewhat sensitive – kid inside of him. And she does it by virtue of an incredibly understated monologue that has almost nothing to do with Marcus’ problems.

By exploring all of this by way of one iconoclastic character, Schamus provides us with a new lens through which to see our hopelessly depressing 24-hour news cycle. The issues and tensions we face today aren’t so new, and if Marcus Messner teaches us anything, it’s that worry warts who fail to learn from history are doomed to repeat it.

In other words, a mind is a terrible thing to waste on being afraid of life.