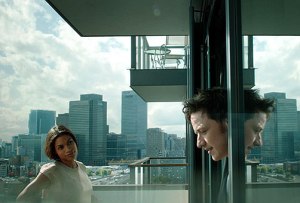 There comes a point in ‘Trance’ where the film’s plot fully unravels, caterwalling down like the rungs of a Slinky toy. That’s not to say I thought the plot was bad or completely unbelievable; far from it. I truly admired this film because it did a
complete 180 successfully.

James McAvoy plays Simon, an art thief posing as a security guard and auctioneer at an art auction-house. When a heist goes incredibly wrong, ringleader Franck (Vincent Cassel) suggests hypnotherapy to help Simon remember where he put Goya’s ‘Witches in the Air.’ Simon chooses Elizabeth (Rosario Dawson), whose commanding personality leads her to Franck’s inner circle. As the hypnosis work gets deeper and the game Elizabeth begins to play with all parties involved becomes more and more complex, bits and pieces of Simon’s true history are revealed, leading up to the aforementioned climax in which Simon – believably – becomes a person completely separate from who he is in the film’s opening act.

The trio of Dawson, McAvoy and Cassel is something you can’t tear yourself away from. Their dynamics change, devolve and grow over the course of the film’s rising and falling actions. Dawson is a knockout in this movie. She graces the screen with the type of confident character that’s sadly absent from most modern English-language filmmaking. McAvoy’s switch is well-played and well-disguised early on. Cassel is always great as a smooth criminal, and in ‘Trance,’ he’s called upon to go past this easily-stereotyped character type with a certain depth of emotion, and he more than succeeds.

‘Trance’ is not without Boyle’s signature kinetics and kaleidoscopic visuals, and those serve a hypnotic purpose, which is perfectly apropos for a movie that is as hypnotizing as it is immediate and visceral.