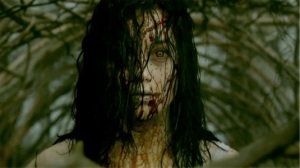 When referring to the recent Texas Chainsaw 3D, the latest in the Texas Chainsaw Massacre saga, Tobe Hooper, the director of the original film was quoted as saying TC3D was ‘Incredible’ and ‘perfectly terrifying’. While Hooper’s comments smack of insincerity given the quality of TC3D, Sam Raimi’s positive reaction to the remake of his horror classic, 1981’s The Evil Dead has to be seen as genuine, because Fede Alvarez’s Evil Dead is frightening, extremely well-made, and pays homage to the original in many interesting ways.

Jane Levy plays Mia, a young woman dealing with recurring family drama and her own drug addiction. Her long-lost brother David (Shiloh Fernandez) and their friends return to a family-owned cabin to watch Mia throw her cocaine away and to keep tabs on her progress over the first few days off drugs. These efforts are thwarted, however, when Eric (a very funny Lou Taylor Pucci) opens a book found in the cabin’s gruesome basement marked ‘LEAVE THIS BOOK ALONE’. Soon, Mia becomes the victim of demonic possession – along with many of her friends. If you feel like you’ve seen plots similar to this before, you have, but the reason Evil Dead gets away with it is that the original film had barely any plot to it at all. The characters in that film, with the exception of fan-favorite Bruce Campbell as Ash, are basically just kill fodder. There is no motivation behind the weekend in the woods other than to have a good time. The reason the original worked outside of its weak story is that it was the first film to balance horror campiness and intentional comedy with downright terror and a genuine creep factor. That’s also the reason this version works, but with both the gore and campiness amped up to eleven.

I think Alvarez recognized that Raimi’s Evil Dead created many of the tropes that have become so dull and tiresome to modern horror audiences, and so by poking fun at the tropes that are present within his own film, he gets away with using them. But the film also strays away from something that Drew Goddard’s Cabin in the Woods was criticized for, and that’s not being enough of its own solid horror exercise to be allowed to poke fun at the genre as a whole. I didn’t agree with that criticism at the time and I still don’t, but Evil Dead is gory enough and truly scary enough to makes its own mark. Also pleasing to horror fans who want something rightly hair-raising will be the completely practical gore effects, which make the film more terrifying than anything computer-generated blood could ever convey. Levy’s fine performance also contributes to a general eeriness; when she gets possessed, the film kicks into high gear. Alvarez has to juggle several different workloads here: he has to make the film distinctive from Raimi’s version, he has to update the scares for a modern audience, and he has to make the story intriguing enough for us to feel sympathetic towards Mia. At least from this horror buff’s perspective, he succeeds on all three fronts.